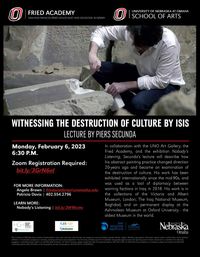 "Witnessing the Destruction of Culture by ISIS"

In collaboration with the UNO School of the Arts Gallery and the Sam and Frances Fried Holocaust and Genocide Academy exhibit titled Nobody’s Listening, Piers Secunda's lecture will describe how his abstract painting practice changed direction 20 years ago and became an examination of the destruction of culture. His work has been exhibited internationally since the mid 90s, was used as a tool of diplomacy between warring factions in Iraq in 2018 and is in the collections of the Victoria and Albert Museum, London, The Iraq National Museum, Baghdad, and on permanent display at the Ashmolean Museum at Oxford University — the oldest Museum in the world.

This program is organized and hosted by UNO's School of Arts and the Sam and Frances Fried Holocaust and Genocide Academy and co-sponsored by the Holocaust, Genocide, and Interfaith Education Center at Manhattan College; Center for Genocide and Human Rights Research in Africa and the Diaspora at Northeastern Illinois University; The Ray Wolpow Institute for the Study of the Holocaust, Genocide, and Crimes Against Humanity at Western Washington University.