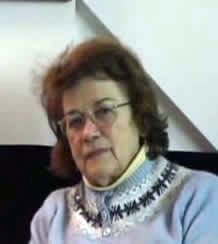 Clara Knopfler was born January 19, 1927 in Cehul-Silvaniei, Transylvania, a small town in northern Romania. She and her brother Zoltan were raised by their mother, Pepi, and father, Joseph. When Ms. Knopfler was 13, the Nazis invaded and she was denied public schooling, but fortunately, local scholars and the Hungarian government helped to set up a private school for Jewish children. Ms. Knopfler and her family experienced the steady growth of anti-semitism towards Jewish Transylvanians between 1940 to 1944. In 1944, they were forced into a ghetto, leaving behind all of their possesions. That June her family was transported from the ghetto to Auschwitz, where she and her mother were separated from her father and brother. But after eight days in Auschwitz, Ms. Knopfler and her mother were selected to be factory workers and were transported to a factory in the town of Riga. Their time at the factory was followed by six months digging trenches in East Prussia. Throughout the experience, Mrs. Knopfler and her mother managed to endure the treatment and survive the horrible conditions of the work camps. As Russian forces advanced, the Nazis sent the workers on a death march, and then abandoned the weak, starved workers on a rural farm. Though it took them three months, Ms. Knopfler and her mother managed to walk home to Cehul-Silvaniei. Her mother found work at a hardware store, and Ms. Knopfler took a job at the town hall while she finished her schooling. Today Ms. Knopfler talks about her experiences and is an educator and activist.