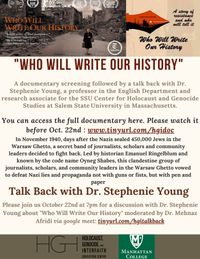 Film Screening of “Who Will Write Our History” in conversation with Dr. Stephenie Young

Stephenie Young is  a professor in the English Department and  research associate for the SSU Center for Holocaust and Genocide Studies at Salem State  University in Massachusetts. She completed her M.A. and Ph.D. in Comparative Literature at the State University of New York, Binghamton and her B.A. in Art History from California State University, Long Beach. She has published widely in both national and international journals. Her forthcoming book, The Forensics of Memorialization, is  about the "forensic imagination," and how  traumatic material culture normally considered scientific evidence is used instead to create visual narratives that shape memory politics in post-conflict former Yugoslavia. With Paul Lowe (University of the Arts, London), she co-organizes the annual conference, Why Remember? Memory and Forgetting in Times of War and Its Aftermath, in Sarajevo, Bosnia and Herzegovina. With Dr. Liliana Gomez-Popescu she co-leads the Network for Aesthetic Ecologies comprised of architects, artists, curators and theorists based in Zurich and Lebanon. She has received numerous fellowships and grants to conduct her research on comparative genocide and aesthetics. In fall 2019 she was in Warsaw, Poland as a Senior Research Fellow at the Jewish Historical Institute to conduct research about the Ringelblum archive as part of a larger study about contemporary border politics, evidence and memory.

Please watch the documentary before October 22nd's conversation. The documentary can be accessed here anytime before then: www.tinyurl.com/hgidoc

The talk back will take place via google meets on Oct. 22nd at 7pm: www.tinyurl.com/hgitalkback