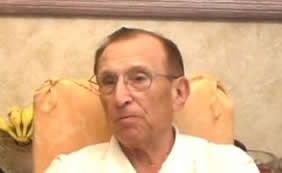 Philip Freid was born in Lodz, Poland in May of 1928. He was the youngest of three children born to Ita and Hersz Freid. Mr. Freid was 11 years of age when the Germans invaded Poland in 1939, and he first experienced ghetto life in Lodz at the age of 12. During his family's time in the ghetto, his father died of starvation. In August 1944, 16 year-old Philip and his remaining family members were sent to Auschwitz. Mr. Freid and his brother, Leon, were seperated from their mother and sister on 26 August. The two boys spent six months in Auschwitz before being sent the labor camp Flossenburg, where they worked in a factory making bombs. On May 7, 1945, Mr. Freid and Leon were liberated. After the war, Mr. Freid and Leon went back to Lodz and rented a small apartment, but later Mr. Freid moved to Berlin, Germany to attend a Hebrew school. In 1949, Mr. Freid, his brother, and his sister-in-law settled in the United States.