An adolescent, Irene Adler survived on her own in Budapest.  At one point she was rounded up and sent on a forced march out of the city, but was able to return.  Following the liberation of Budapest by the Russians in 1944, she moved to the home of her only surviving relative, an uncle.  Irene met her future husband while she was distributing sandwiches to returning camp survivors (please see Bernard Adler Interview).  She later joined Bernard in Israel where they were married in 1948 and had one son.  Irene and Bernard had a second son after their move to New York.

I. Oh how much I am thinking about you

With admiration, with love.

The years are going by, but you are always in my mind.

I never can forget you, mother.

II. From where did you take the strength?

What gave you the courage?

To love, to work, to help, to give

All your time for us, when we were in need.

III. The times were hard, there was war and

Every day was a struggle, filled with fear and hunger.

Hate surrounded us, riots and killing

From where did you take the strength mother?

IV. To stand straight, like a tree in the storm.

Give us a smile, to say a kind word.

Understand us and give a warm home.

From where did you take the strength, mother?

V. I am remembering. I see tears in your eves.

But you never complained to us

You tried to keep away the misery, the bitterness.

Oh how much did you suffer, mother?

VI. The war ended, but you never came back.

You went to Auschwitz on the train

Ended up getting killed by the enemy's hand.

But in your last hour, you were thinking of us,

What happened to your youngest children?

VII. Your teaching we remember, the kindness we practice.

What we learned from you and father,

We are believing in religion and love.

Thank you for everything, mother.

My Father looked up, his eyes were sad,

"1 am not ready to leave the village, my work is not yet done.

I am planting a tree; life has to go on, even if I am not here anymore.

The sun is shining, buds are on the trees, flowers, life is around us.

My Father's hand planted the tree;

The hand which talked without words,

The hand which gave a child a hug,

The hand which held the Torah Scrolls.

The hand which waved good-bye to me,

The hand which fed me when I was young;

The same hand planted the tree in the ground

With strength,that life continue, life must go on.

He believed, only love he had.

He wanted the pear tree to grow and blossom,

Like a symbol of life, in misery and death.

The village he left with tears in his eyes.

The wagon door closed on him hard.

They took my Father to Auschwitz,

Where people suffered, where millions had died.

My Father saw at Auschwitz a raised hand,

Which chose between death and life.

The hand which was a puppet of a monster's mind,

With no human feeling at all inside.

My Father put his hand forward,

A gesture of a question, why?

But he never got an answer.

The monster's hand showed him he had to die.

But his good deeds stayed on.

They could not kill his ideas, his religious beliefs,

Yes, my dear Father, religion and love will continue with future generations to come.

As long as a human heart is beating,

As long as there are two outstretched hands,

As long as pear trees are growing,

As long as religion and love live in Man. 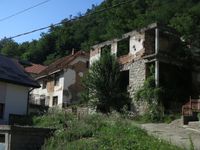 Please join us for a conversation about the challenges involved in oral history interviews with survivors of the 1995 Srebrenica genocide.

Kristallnacht Lecture: " BOYKOTT! April 1, 1933: Spectatorship and the Exclusion of Jews from the German Community"

In partnership with the Kupferberg Holocaust Center of Queensborough Community College. Featuring guest speaker Dr. Peter Fritzsche, Professor of History from the University of Illinois.

" The COVID-19 Pandemic & Our Lasallian Mission: A Campus-Wide Reflection"

Co-sponsored event with the Peace & Justice Studies department. This event is aimed to reflect upon the impact of COVID-19 and how Manhattan College's mission of social justice has been affected.