Gerta was born on October 8th, 1915 in Vienna and later moved to Prague where she would meet her future husband, Albert.  In 1937-38, discrimination against the Jews grew worse and Gerta immigrated to the United States with Albert’s sister as her sponsor.  Making her home in Washington D.C., she worked for the Herald Tribune, a job that would prove fortunate – a secretary at the newspaper became a sponsor for her mother’s immigration to the US.  Eventually, Gerta’s brother, Fred, along with Fred’s girlfriend and her own brother were able to come to the United States.

Austria is the pace of my birth
To me, the most beautiful place on earth
The snow covered alps, the Danube, the lakes
The Vienna pastries and chocolate cakes.
Something is very wrong there and you will find
It's the Austrians hateful and narrow mind.

That's all I will try to express in poetic shape. It's absolutely impossible to describe to you the terrible conditions in that country, long before they decided to do away with Jews and other second rate citizens by sending them into gas chambers to a horrible death.

We encountered their hatred from early on in life. To be a good successful student was difficult with anti-Semitic teachers. They simply would not pass us to next grade unless we were very well prepared with our studies.

When I had decided to become a language teacher and had passed my examination with excellent results, it was absolutely impossible to obtain employment in any of our middle schools. To earn a living I had to give private lessons and wore out my shoes getting from one student to the next. Many adults wanted to learn English in preparation of their emigration to either England or America. The desire was inevitable after Adolf Hitler had overrun our borders. He and his henchmen Goebbels and Goehring proclaimed daily that the Jews were the source of all evil. They had all the money in the world etc. They were a wonderful scapegoat and had to be eliminated once and for all.

We were forced to wear yellow armbands at all times to be recognized immediately; we were not permitted to sit on a park bench. Luckily, the only direct attack on me did not hurt me physically. A man sitting next to me in a bus turned to me and said in a loud voice, "I will not sit next to a Jewish sow." That was shortly before I left Austria for good. Not to mention that I had to go to the Gestapo office and ask for an exit permit. They gave me one under the condition never to come back. I gladly signed this piece of paper. As a good bye present they took my passport and added the name "Sarah" for my name so that the foreign country would be aware of my faith.

Arriving in Washington D.C. in 1938 we tried to find an apartment and were told that they do not rent to Jews.

We came a long way to find similar conditions here.

Be aware of my faith. 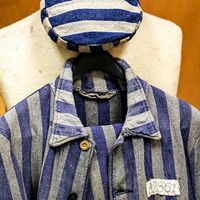 " The COVID-19 Pandemic & Our Lasallian Mission: A Campus-Wide Reflection"

Co-sponsored event with the Peace & Justice Studies department. This event is aimed to reflect upon the impact of COVID-19 and how Manhattan College's mission of social justice has been affected.

Kristallnacht Lecture: " BOYKOTT! April 1, 1933: Spectatorship and the Exclusion of Jews from the German Community"

In partnership with the Kupferberg Holocaust Center of Queensborough Community College. Featuring guest speaker Dr. Peter Fritzsche, Professor of History from the University of Illinois.