by  Martha A. Frazer, LCSW

L’Dor V’Dor. From Generation to Generation. This idea of transmission of faith, knowledge, and experience from one generation to the next has been and always will be central to the survival of Judaism.

Sadly, most survivors of the Holocaust have had to transmit the most horrifying experiences people can suffer from their generation to their children and grandchildren. Currently, there is little documentation of this process.

How did parents, who wanted to protect their children from knowledge of the extent of Nazi atrocities, deal with children’s asking about the number on their arms or their nightmares and screaming in the night? How did parents respond when asked by their children why they had no grandparents or other relatives?  What did the children understand about their parents’ experiences? How did their understanding evolve as they grew older? How have the children, now middle-aged, transmitted their understanding of their parents’ experiences to their own children?

The Second Generation Project at Manhattan College was created by Assistant Director Martha Frazer in order to begin answering some of these questions by conducting oral history interviews with children of survivors.

These interviews form a Pilot Project which begins to delineate the effects of parental Shoah experiences on their children. Although the interviews shed some light on the way in which the Second Generation understands and internalizes parental experience, the hope is that rather then merely providing some answers to questions asked above, the Project will pique interest and lead other people to explore the adaptation of members of this generation.

It is clear to the Second Generation that they have been affected by the trauma their parents suffered. Ari Spett, who prefers to call himself a “secondary survivor,” says that if the Shoah is seen as a 10 point natural disaster such as a tsunami, he has been living in a 5 point tsunami his entire life. Except for the youngest, survivors have memories of family life before the war which they can draw upon for sustenance. Children of survivors have no pre-war life. Whether discussed openly or rarely raised, parental Shoah experiences have colored their children’s lives. The interviews explore these effects during the interviewee’s childhood, adolescence, and adulthood.

As adults, two of the three interviewees have had to deal with when and how to talk to their own children about grandparental experiences. Now that most survivors are no longer able to educate younger generations, the Second Generation is taking on that task as well. On Yom Hashoa, Arnie Adler went to a Jewish Day School to make a power point presentation of photos related to his father’s story. He asked the students to suspend disbelief and told the story in the first person, playing his father. Marilyn Honigman not only exhibits her Holocaust paintings, but also uses them to teach students about the Holocaust and to show teachers how use art to do the same. Ari Spett has recently begun to accompany his Dad to his talks in local schools.

What is your name, date of birth and current age, place of birth?

Do you have siblings? If so, their names, age, and place of birth.

Where did you live? Describe your home, neighborhood, town.

How was religion observed in home? Favorite holiday? Synagogue membership?

What were your parents’ occupations? Did they work long hours?

Do you think your family was struggling, was poor?

What is your earliest memory of your parents?

Do you know whether your parents had nightmares?

Were you named after a relative who died in the Shoah?

What were your feelings about the absence of grandparents?

Was there any extended family?

Did your family have friends who were survivors?

Did your parents talk to you about their experiences during the Shoah?

Did you overhear them talking to other people about the past?

Did you ask questions? If so, what did you ask? Were there things you wanted to ask but felt you could not ask?

Did you see differences between your family and that of classmates?

Did you know other children of survivors? If so, did you feel a connection to them?

Did you have a Bar Mitzvah? If so, describe the ceremony and party. Who attended?

Describe your High School Education. Was there any further Jewish education?

Who were your friends? Jews? Other 2nd generation? Non-Jews?

What were your academic interests? What activities did you do for fun?

Were your parents able to have fun? What made them happy?

Did you discuss your parents’ connection to the Holocaust in school? With friends?

How would you characterize your relationship with your parents? With your sibling(s).

What did you think of your parents when you were a teenager?
What did they say or do that annoyed you?

Did you ever feel embarrassed by them?

Were your parents anxious about your safety outside the home?

Was there anxiety about health – yours or your parents?

Did your parents talk about their experiences more now that you were older?

Did your family experience any discrimination as survivors or as immigrants within the Jewish community? Within the larger community?

Describe your academic interests at college and other activities while in college.

Did you have any summer jobs?

Did you take any courses about the Holocaust? Read books or see movies about it?

Did you have any graduate education?

How did you decide on a career?

Did you involve your parents in these decisions?

Do you think your parents’ past had any effect on your career choice?

How has your professional life evolved?

Are you satisfied now with the career choices you made?

Where did you live after college?

Describe the people with whom you socialized.

What kinds of people did you date? Were they Jewish? Were they children of survivors?

How did you meet your spouse? Please describe him/her.

How did you make the decision to marry?

Were your parents involved in your marriage planning? How did they seem to feel?  about your intended?

Describe your wedding – the service, the reception. Who attended?

Where did you live after your marriage?

How did you and your spouse feel about having children?

Did your parents voice their opinion about having grandchildren?

Tell us about your children - when they were born, their names, and current ages.

How did you observe Judaism in your own home?

Did you join a synagogue? Did your children have a Jewish education, a Bar Mitzvah?

How did your background affect the way you raised your children?

What did you tell your children about their grandparents’ Shoah experiences?

Did your children ask questions about their grandparents’ accents, their past?

Did they ask about the Holocaust? Did they want to learn about it?

Describe your children’s relationship with their grandparents.

Do you think that their grandparents’ past has affected your children’s lives? in any way?

Have you or your children had any experience with anti-Semitism?

What is happening in your children’s lives at this time?

Did your parents give any testimony or do any writing about their experiences?

How do you feel about their doing or not doing that?

Did you want to watch their tapes? If so, how did they affect you?

Did you want your children to watch the tapes?

Do you feel you now have an understanding of what your parents suffered, what they lost, and how that affected them.

Is there a particular aspect of their suffering which most upsets you?

Are you able to see ways in which their experiences have affected their personality and their functioning?

Did your parents discuss their questions, thoughts and feelings about what happened to them with you as they entered old age?

Have your feelings and thoughts about them changed as you have matured?

Do you see them as strong or fragile or both?

Do you think the brutality and starvation experienced by your parents had anyaffect on their health as they aged?

Do you think your parents’ belief in God was affected by the Holocaust?

Did their past affect your religious beliefs?

Have you visited your parents’ hometown or other sites connected to their experiences?

Describe your current relationship with your parents.

If parents are deceased, describe your relationship with them as they aged.

Have issues with your parents affected your marriage?

Describe your and your family’s relationship with your siblings and their family.

How would you characterize the effect on your life of your parents’ past?

Have you had dreams or thoughts about finding yourself in Holocaust situations?

Have you been involved in any 2nd Generation groups or any activities related to the Holocaust?

Do you currently feel a special connection to members of the Second Generation?

Do you think that children of survivors “own” the Holocaust, know more about it than other people do?

Do you think there is a relationship between the Holocaust and the 1948 establishment of Israel as an independent country?

How do you see your connection to Israel?

Do you think Jews are currently in danger in the US or in Israel?

genocides in an effective way?

Why were you willing to participate in this Project?

Have you expressed your feelings about the Holocaust in any other way –in art, in writing?

Is there anything else you would like people to know about the effect of the Holocaust on the children of survivors?

The following Second Generation interviews were conducted by Martha A. Frazer, LCSW

"I never thought I would have a show on the Holocaust work. When I started doing them, I was doing them for myself. I decided I need to do this."

"The most defining aspect of my life occurred before I was born."

"From an early age I was enveloped in the cloud of the Shoah." 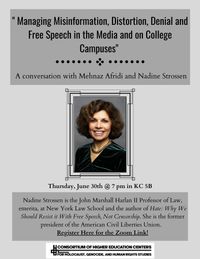 "Managing Misinformation, Distortion, Denial and Free Speech in the Media and on College Campuses"

Kelly Commons 5B and Zoom

Nadine Strossen is the John Marshall Harlan II Professor of Law, emerita, at New York Law School and the author of Hate: Why We Should Resist it With Free Speech, Not Censorship. She is the former president of the American Civil Liberties Union. Please pre-register at the link provided above. 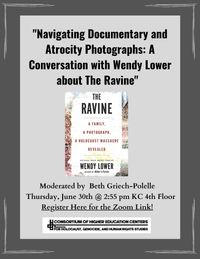 "Navigating Documentary and Atrocity Photographs: A Conversation with Wendy Lower about The Ravine"

The event will be moderated by Beth Griech-Polelle. Please Pre-register at the link provided above. 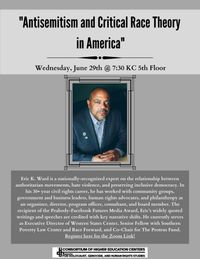 Eric K. Ward is a nationally-recognized expert on the relationship between authoritarian movements, hate violence, and preserving inclusive democracy. In his 30+ year civil rights career, he has worked with community groups, government and business leaders, human rights advocates, and philanthropy as an organizer, director, program officer, consultant, and board member. The recipient of the Peabody-Facebook Futures Media Award, Eric’s widely quoted writings and speeches are credited with key narrative shifts. He currently serves as Executive Director of Western States Center, Senior Fellow with Southern Poverty Law Center and Race Forward, and Co-Chair for The Proteus Fund.